I have been a scientific advisor for a few popular science videos:

An extended halo around an ancient dwarf galaxy

Anirudh Chiti led a paper detecting the very outskirts of the dwarf galaxy Tucana II. This is the furthest out that stars have been detected around a tiny galaxy. The paper is published in Nature Astronomy. A collection of press from Carnegie, MIT, The Guardian.

The S5 survey has discovered the most metal-poor known globular cluster in the Milky Way. It is being actively tidally shredded by the Milky Way. A collection of news articles from Carnegie, VICE, Sydney Morning Herald, Sky and Telescope, Chicago Tribune (in Spanish), and CNET. The Galactic Times produced a podcast about the Phoenix stream.

The S5 survey serendipitously found the first known star to be kicked out from our galaxy’s central black hole. Here are a collection of news articles from Carnegie, the New York Times, CBS News, and Space Australia.

In 2020 I gave an online talk at Astronomy on Tap with Dr. Brittany Kamai. You can watch it on YouTube!

Glimpses of the Cosmic Dawn

In 2019 I gave a talk at the Huntington Libraries about “Glimpses of the Cosmic Dawn”, which you can watch here:

Searching for the First Stars

In 2017 I gave a talk titled “Searching for the First Stars” at the Carnegie Observatories Open House. You can watch it on YouTube!

My favorite galaxy is Reticulum II. 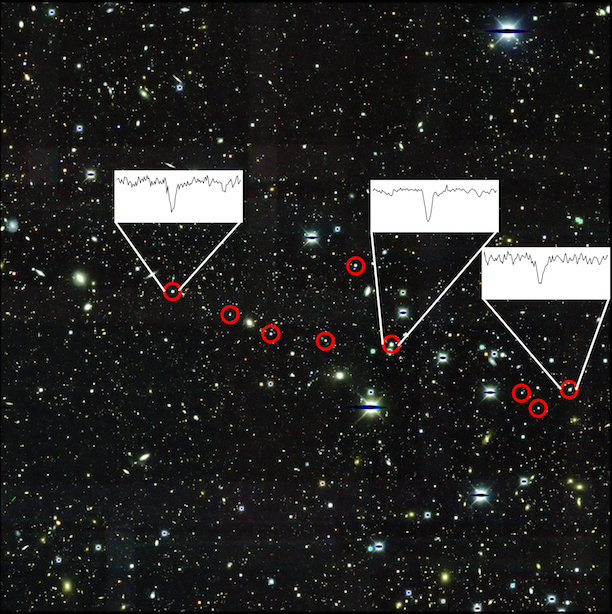 The nine brightest stars in the r-process galaxy Reticulum II are circled.
Three of these stars are highlighted, showing their large barium content.

Check out The Caterpillar Project. Here’s a quick video showing what it’s about. Video production credit to Brendan Griffen.